The 25th Moravian Music Festival attracted hundreds of musicians to Winston-Salem, NC, to sing, play instruments, handbells, and organs, and to hear fine music in worship and concert settings. Many more attended and enjoyed the many performances of both new and historic Moravian music.

The week-long Festival is held every four years and is for everyone, serving musicians of all levels, from beginner to director. Local planning, arrangements, and programming were ably directed by Festival Committee Chair, Amanda Moody Schumpert, and a committee of local volunteers.

The Festival consisted of a children’s summer music program, a youth program, special young adult events, and an organ crawl! Participants chose tracks for choral, wind instruments, and/or handbells. Each day was comprised of workshops and rehearsals for ensembles, handbells, orchestras, and lots of singing, with special moments for worship, fellowship, and reflection. Each evening began with a band prelude, and culminated with featured concerts by the Chorus and Orchestra, Concert Band, Chamber music ensembles. The Festival had an Anthem Sing, a Singstunde, a Lovefeast (of course), and a partnership concert with the Salem Band.

Replete with workshops and lectures, Moravian Music Festivals are a learning opportunity for singers, instrumentalists, and directors (Moravian and non-Moravian). It is full of practical ideas, skills, and techniques for the musician, the musical group, and the congregation.

The 25th Festival took a step up in quality of conductors, composers, singers, and instrumentalists, highly acclaimed in their individual disciplines. 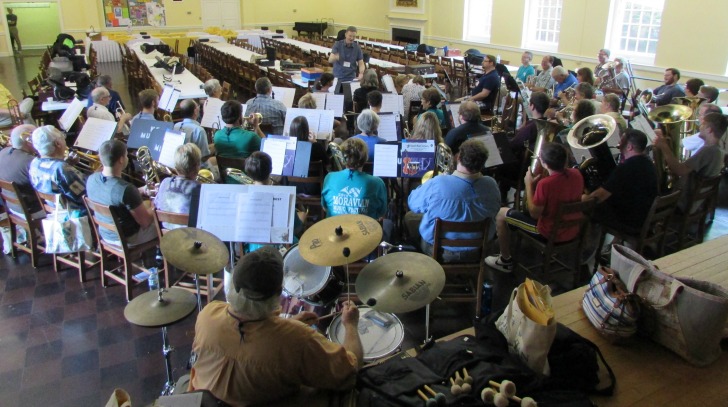