I Have Chosen You

This concert of music for voice and strings will feature soprano, Mary Wilson, who has been hailed as one of today’s most exciting artists, receiving critical acclaim for a voice that is “lyrical and triumphant, a dazzling array of legato melodies and ornate coloratura” (San Francisco Chronicle). Opera News heralded her first solo recording, Mary Wilson Sings Handel, stating “Wilson’s luminous voice contains so much charisma,” they dubbed her recording one of their “Best of the Year.”

Premiering at 7:00pm EDT on YouTube
(that means that if you start late, you can still watch from the beginning; also, viewable at a later time.) 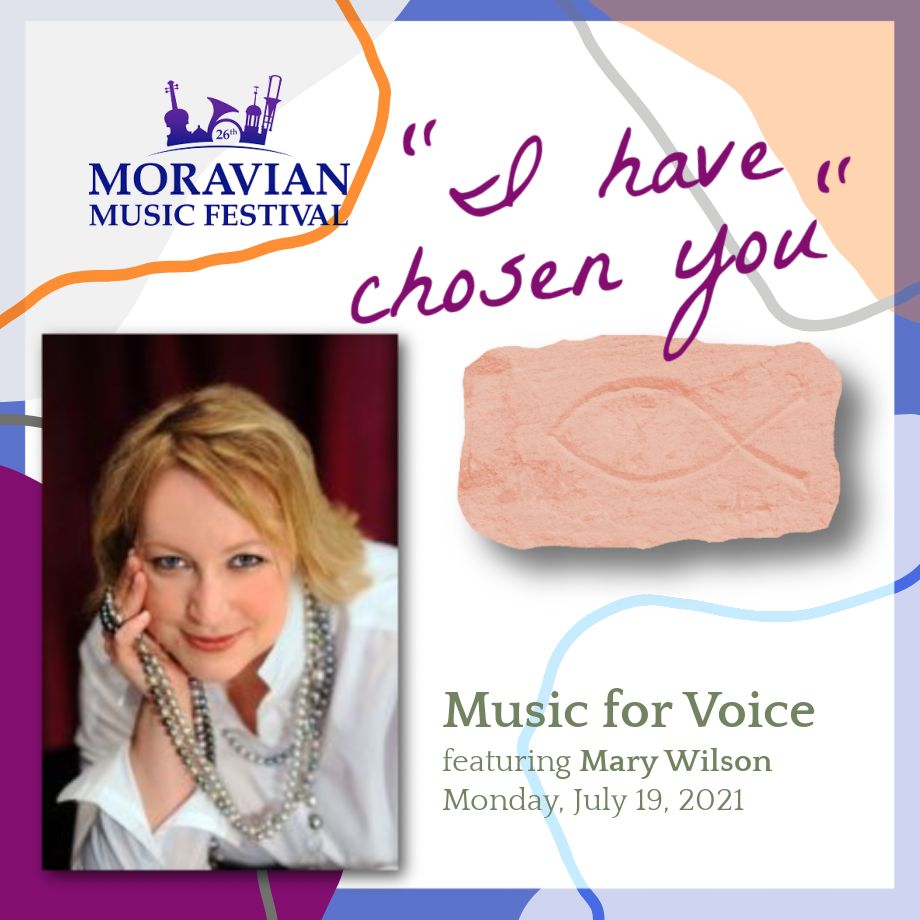 About our Artist, Mary Wilson

Soprano, Mary Wilson, has been hailed as one of today’s most exciting artists, receiving critical acclaim for a voice that is “lyrical and triumphant, a dazzling array of legato melodies and ornate coloratura” (San Francisco Chronicle). Opera News heralded her first solo recording, Mary Wilson Sings Handel, stating “Wilson’s luminous voice contains so much charisma,” they dubbed her recording one of their “Best of the Year.”

Equally at home on the opera stage, she is especially noted for her portrayals of Zerbinetta in Ariadne auf Naxos, Susannah in Le Nozze di Figaro, and Gilda in Rigoletto. She has created leading roles in North American and World Premiere performances of Dove’s Flight, Glass’ Galileo Galilei, and Petitgirard’s Joseph Merrick dit L’Elephant Man.

Ms. Wilson is an Assistant Professor of Voice at the University of Memphis, teaching applied voice and graduate Oratorio Literature, and resides in Memphis with her husband, son, and two dogs.

Allen Frank holds a bachelor of arts degree in music from Moravian College in Bethlehem, PA. Prior to his collegiate studies, Allen studied at the Armed Forces School of Music in Little Creek, VA before a three-year tour of duty with the United States Marine Corps Band. As a member of the Marine Corps Band, Allen served as principal tubist and soloist for the concert and marching bands, as well as the band’s brass quintet. In his time with the Marines, Allen had musical collaborations with such names as the Canadian Brass, the Neville Brothers, and the “President’s Own” Marine Band. Allen was a member of the national touring cast of the Tony Award winning Broadway musical “Blast!” before returning to Pennsylvania to begin a career in music education. Allen has also performed as a tuba soloist with the Allentown Band, which carries the name of America’s oldest civilian concert band and is currently a member of the Mainstreet Brass Quintet.

Dr. Sinclair is the John M. Tiedtke Professor of Music at Rollins College.

He teaches conducting, a variety of other classes as needed and serves as the primary conductor for the Department of Music. He is also celebrating his 25th season [2014-15] as Artistic Director and Conductor of the renowned Bach Festival Society of Winter Park. He also currently conducts the International Moravian Music Festivals, the Messiah Choral Society (Winter Park), and has conducted for the Berkshire Choral Festival and numerous others.

Dr. Sinclair earned his undergraduate degree from William Jewell College and his master’s and doctoral degrees from the Conservatory of Music at the University of Missouri in Kansas City. During the past twenty years, he has made over one thousand appearances as conductor, clinician, or lecturer throughout the United States and in many foreign countries.

Dr. Sinclair is also a conductor of the Candlelight Processional at EPCOT and has conducted recordings for Warner Brothers, Walt Disney Corporation, the Moravian Music Foundation, and the Bach Festival Society.